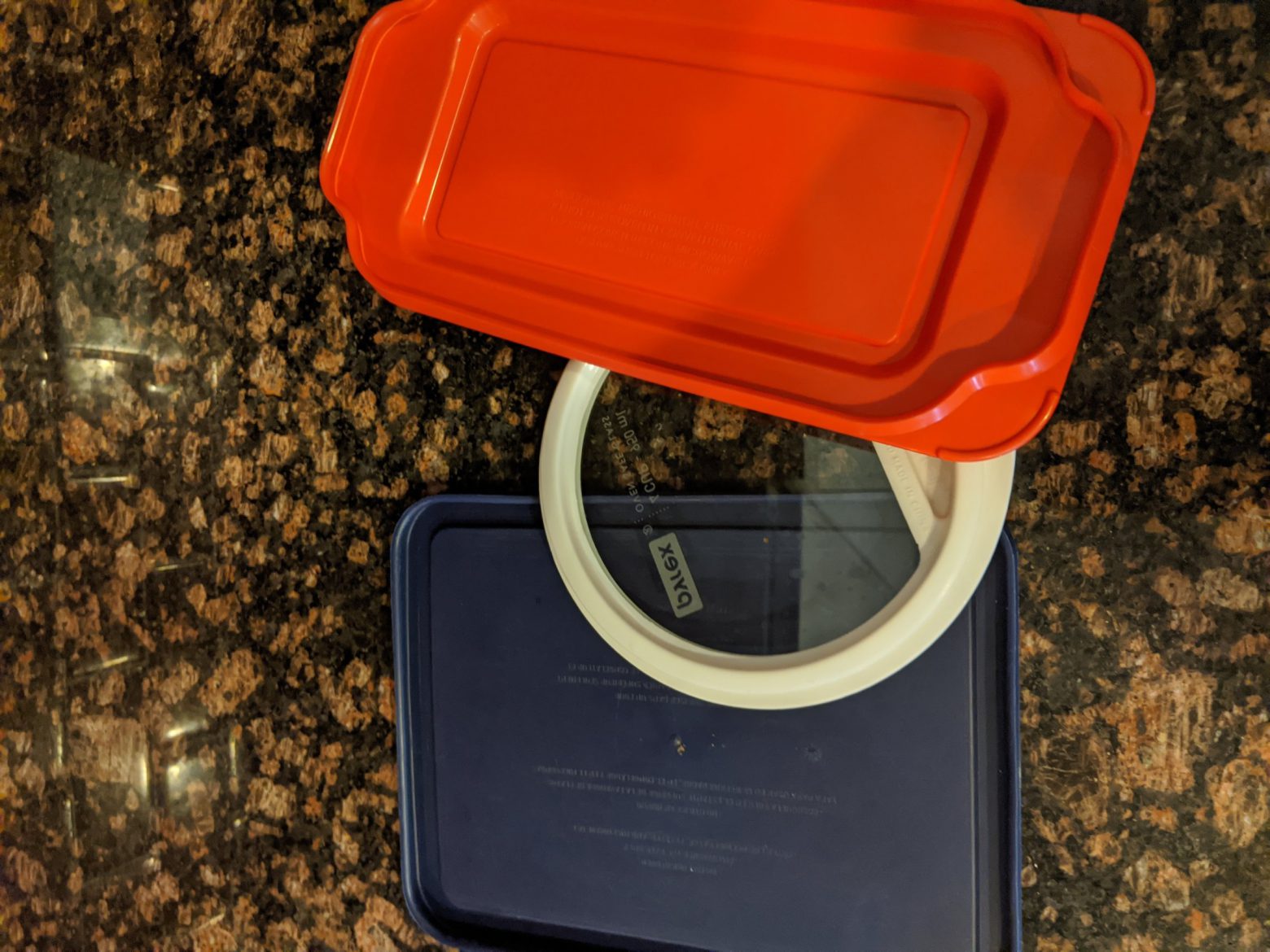 In this season of life when we’re trying to make things last longer since it’s harder to buy in general, don’t forget Replacements. Replacement is in line with Repair, a lot of times pieces that wear out more quickly or over time are available to purchase to extend the life of a product. Replacing part of an item is usually cheaper than purchasing a new one, or even a used complete one.

My Pyrex and Anchor products are old, like 10 years old, and we use them daily. As such and conveniently enough, when three of my lids started cracking at the edging and literally crumbling away, I decided to replace them. Amazon did not have the specific sizes I needed, though they do have the more common sizes. I check Amazon when I can since we have subscribe and save items coming once a month. I needed a loaf lid, an 11 cup rectangle lid, and a 4 cup glass lid so I ordered directly from Pyrex. I had to pay shipping and it took about a week to arrive. I like the glass and silicone lids when I can get them since they’re more sturdy to stack and last longer than the plastic lids. I’ll recycle the deteriorating lids once the seal becomes compromised.

On the way home from the park last week, one of the wheels fell out of my son’s Little Tikes car (new-to-him). The wheel top is missing the axel cap and maybe a bushing so it came off. Luckily the washer was in our driveway and it does most of the working keeping the wheel on/in place.

When I went to the Little Tikes’ website to see if I could order replacement parts for the wheels, I did find out 1) I cannot and 2) there are replacements for the steering wheel and key.

I don’t actually mind that the horn doesn’t work, less noise for us!, and the family that gave us the car was using a real key as a replacement which is way better (it’s around somewhere), but if you have your heart set on looking more original/complete these replacements are helpful. The wheel parts would be even more helpful but I suppose wheels don’t come off often enough to warrant providing replacement parts. There are a ton of models of these cars so if you do order replacement parts be careful you’re choosing the correct car.

Not all toys have replacement parts but I recommend you check. Sometimes replacements are not worth the effort, which I hate saying as someone who is a zero waste block leader, but if I have to spend way more money, time and resources to replace a toy part than to buy a new toy, in my house the broken toy is getting recycled. We probably don’t need another toy anyway, so it usually isn’t replaced. In other households the new toy is bought to replace the old one and the broken toy is trashed, or hopefully recycled. As an example, the slide part of my full size Connect Four is broken and we’d like a new slide piece. A new one would snap right on but as Hasbro has a non-navigable replacement site, as far as I can tell replacements don’t exist. Connect Four apparently has several versions, I don’t know which one I have, and so we hold the broken slide in place at the bottom the entire game or use our travel version instead.

When I was ready to re-home our blender but it wasn’t working perfectly, I ordered a new gasket from Amazon to correct the problem before giving the blender to a friend. Amazon doesn’t have all the parts for everything, but they usually have the more common replacement parts and as a Prime member I get free quick shipping vs. paying the manufacturer to ship and it taking longer to arrive.

A lot of household items can be fixed with new gaskets, washers, filters, lids, etc. If you don’t want to replace something you can post it to a Buy Nothing group, local Marketplace, or neighborhood forum. I broke several pieces of my Corningware over the years but still had the lids. I posted pictures of the lids with a ruler for scale and someone was so excited to pick these up! They were lucky, unlike me and my Crock-pot.

If you break a pitcher, lid, knob, many manufacturers offer replacements for purchase but not always and not for older models. My new-to-me Crock-Pot from my in-laws was so old that I couldn’t purchase a lid when I broke it and I didn’t have any luck at the antique malls in the area or on Amazon. It was so sad because the pot still worked great, good quality back then. So I ended up donating the pot to Goodwill for hopefully an artist to use to melt wax or something (which is what the internet said was a good use for un-lided crock-pots).

Shoelaces can be replaced. The soles, heels, toe-caps and sometimes lining of shoes can be replaced. I just found out Austin’s In Step can replace and repair Birkenstocks. I’m not sure what that entails but it’s a great service and I’ll take mine in when I can!

My electric drill battery died and the model was discontinued but I had the instructions so I knew the model number. I was able to find a replacement battery designed to work with my model of drill and it drills great.

When my couch cushions were sagging, I replaced the filling (added more) instead replacing the entire cushions or the whole couch.

It’s also a good idea, if it’s safe, to try and replace something yourself. When my first garage door clicker died, I called the maintenance company and for $35 they set up a replacement clicker, which only has a two houses away range. After the second clicker died (and yes I checked the batteries both times, the circuit boards were fried), I ordered a replacement clicker from Amazon for $10. I made sure the replacement complied with my model of garage door opener and set it up myself. I had to pull out the step stool and reach a bit, but it was cheaper, I was proud of myself, and the range is six houses away instead of two so I’m happy.

These are the items I’ve personally replaced. Please share your ideas and stories to help inspire others!