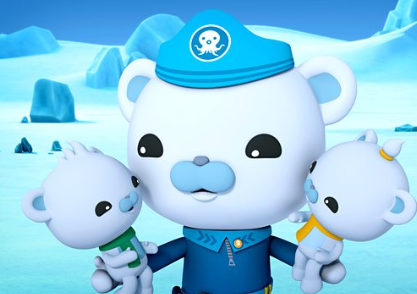 It’s International Polar Bear Day! A few facts and an awareness helper are below. A fun cartoon about polar bears to share with kids is Octonauts’ Great Artic Adventure on Netflix, Season 3, the Earth Day Special. My four year old son loves to learn about the animals in the Octonauts books and tv series. It’s a fun show for adults too. They help animal friends and help in natural disaster situations and I think it’s part of the reason my son is so passionate about animals and trash pickups.

Indigenous people in the North have had their own names for polar bears in many languages and dialects for thousands of years. Later, the bears acquired names from scientists and explorers, including “polar bear” and their Latin name: Ursus maritimus, or “sea bear.”

Polar bears have 2 layers of fur that prevent almost all heat loss. In fact, the fur keeps them so warm that adult males can quickly overheat when they run. Surprisingly, their fur isn’t actually white. It just looks that way. Each hair shaft is pigment-free and transparent with a hollow core that scatters and reflects visible light.

Polar bears have evolved to prey on ringed and bearded seals, which they catch from a platform of sea ice. https://polarbearsinternational.org

As the amount of carbon dioxide in our atmosphere increases, the planet warms up and the sea ice that polar bears rely on to survive disappears. Without sea ice, polar bears lose the opportunity to hunt for food, which is an enormous threat to their survival. As one of the world’s most significant and rapidly growing sources of greenhouse gas emissions, plastic contributes to climate change at every stage of its lifecycle. If we’re going to save polar bears, we must reduce greenhouse gas emissions, including those associated with plastic. ~4ocean

4ocean’s polar bear bracelet is a great way to honor these animals, pull one pound of trash from our oceans and waterways, and to provide you a visual reminder and conversation starter to make greener cleaner choices to reduce our impact on our environment and on places we may not ever be able to see or experience: https://bit.ly/3G6qGrN, Discount Code TAYLORYOUNGBLOOD20. Using my link and code will get you 20% off your first three purchases. As a 4ocean Brand Ambassador, I earn from qualifying purchases which further allows me to promote and share green products and choices with you all.