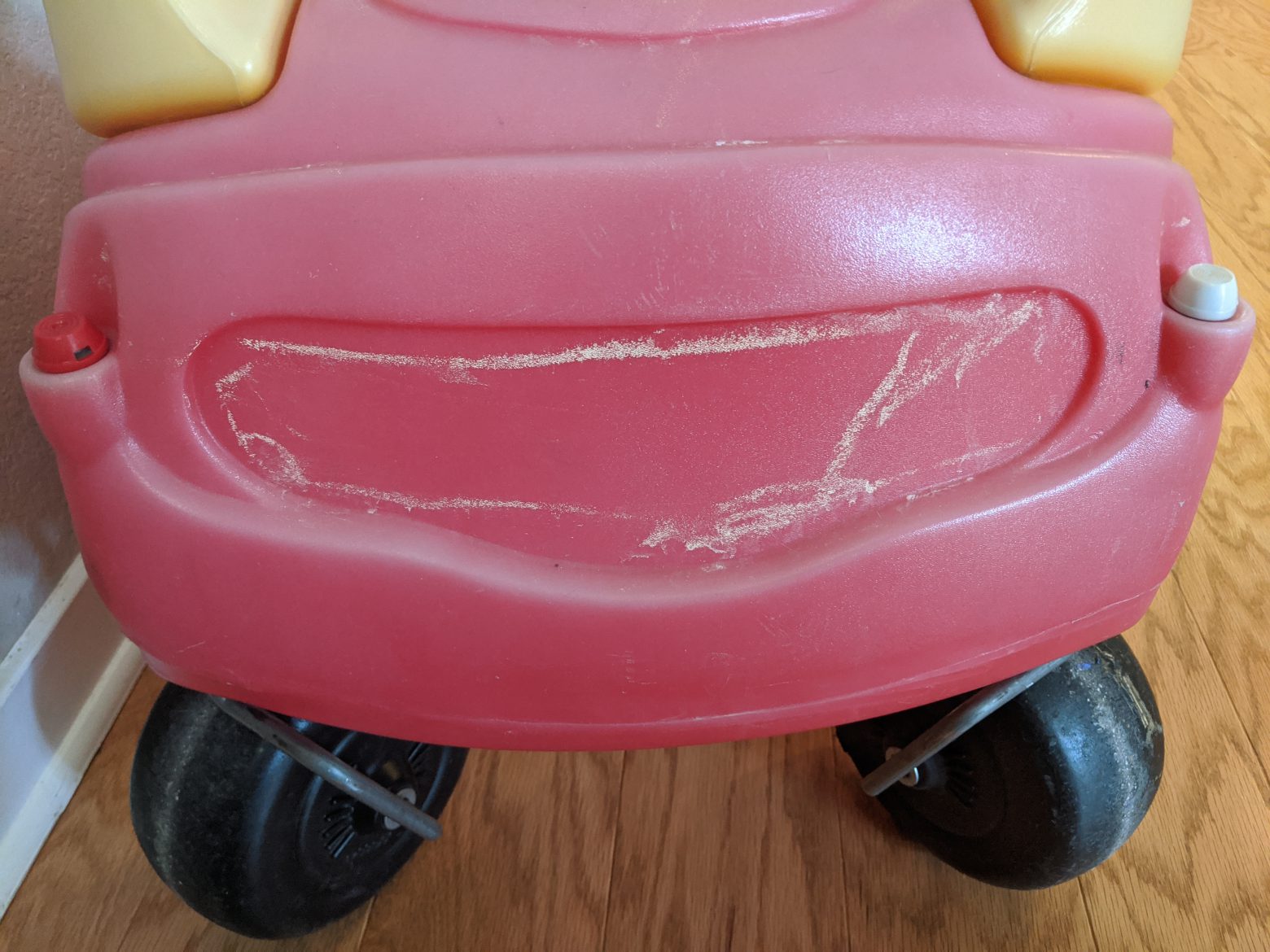 I am so excited to share about this experience, and it’s an actual Repair, one of my favorite “R’s”!

My son was given this car by one of our neighbors who had outgrown it. It’s a Little Tikes Cozy Coupe, the distinctive red and yellow car of youth. They seem to be everywhere in our neighborhood and apparently come in many styles, colors and designs now. I’m still not sure which exact version/edition I have but it looked like a Cozy Coupe II.

After my son had “off-roaded” in this on the cobblestone sidewalk at our local park, we noticed some of the pieces were missing that held on one of the wheels. Not a big deal to drive flat on pavement, but the wheel would fall out every time we went to pick it up to move it, or if he went over a big bump.

The first thing I did was check Little Tikes’ website to see if there were replacement parts for the car. There are, which is great since “planned obsolescence” and non-repairable merchandise are becoming more common themes on many manufactured items. However; the parts sold for the care weren’t what I wanted.

Little Tikes does sell a replacement key and a replacement steering wheel. The horn was in place but broken and the key was missing when we were gifted the car. The family was using a real key and my son loved it so we kept it. The horn bits eventually did fall out and while I could replace it since Little Tikes makes the parts, I’m passing to avoid the noise.

Next, since I didn’t see any replacement hardware listed on Little Tikes’ website, I measured the loose washer I still had from the car to see if Home Depot, Lowe’s, or Amazon had the part. No luck.

Asking neighbors if they knew what do do, several responded. The first with a recommendation to Breed & Co., our local hardware store that is affiliated with Ace Hardware. The second shared a link to a bag of these for $5 plus whatever shippping would be. Since I wasn’t 100% confident on the size to order I passed on that. Other neighbors had recommendations for doing things I don’t have tools to do. A close neighbor and friend had “something that might work,” yay!, but it was too small. So I almost got it taken care of in my neighborhood, ask for help!

I called Breed & Co. (COVID was/is in play so I didn’t go in to discuss plus save the gas trip, right?) and was able to describe this in a way they figured out what it was called. I basically used every word I had found and described what it was doing. Breed & Co. calls them push nuts, Little Tikes calls it an axel cap, Amazon calls them decorate push-ons, plastic cap, cap nuts and cap studs so you can imagine this was confusing at first with Breed & Co. They’re awesome and if I hadn’t done what I did next, I would have braved the store (first thing in the morning with mask to avoid crowds) and gone in with my washer for help since they were sure they had the size I needed.

I decided to do one last thing, which I should have done first. Since I still wasn’t sure what size to get, especially after calling Breed & Co., I emailed Little Tikes. When I spoke with Breed & Co. I had been measuring the width of the washer thinking since the push nut would go over everything, that was what mattered. Not so. Breed & Co. said I needed to measure the metal bolt itself that the push nut would go onto. Since it’seemed in the middle of sizes and didn’t match some of the results I was seeing on hardware sites, I was going to see if Little Tikes could tell me the exact size to buy at the store.

Well, AMAZING customer service! I had looked up the instruction manual (almost all instruction manuals are available online, even if something is “new to you”) to ask them the size of what Little Tikes called the part. I explained:

Do you ever sell or send lost parts? I’ve lost the 2 Bushing (X) and 1 Axle Cap (U) for my Cozy Coupe II Car and would really like to keep the wheel on so it doesn’t fall out of the hole. If not, can you please tell me the diameter of the push nut/axle cap so I can purchase the correct replacement at the hardware store? Thank you.

Well they responded immediately that they would send me the parts I requested and were just waiting on a new shipment of bushings before they would be able to help me out! No cost guys and grace-given this arrived the day before my son’s birthday so he had his car to zoom around on his special day!

I have three take-aways here:

What neat thing have you repaired that you at first didn’t think you could?