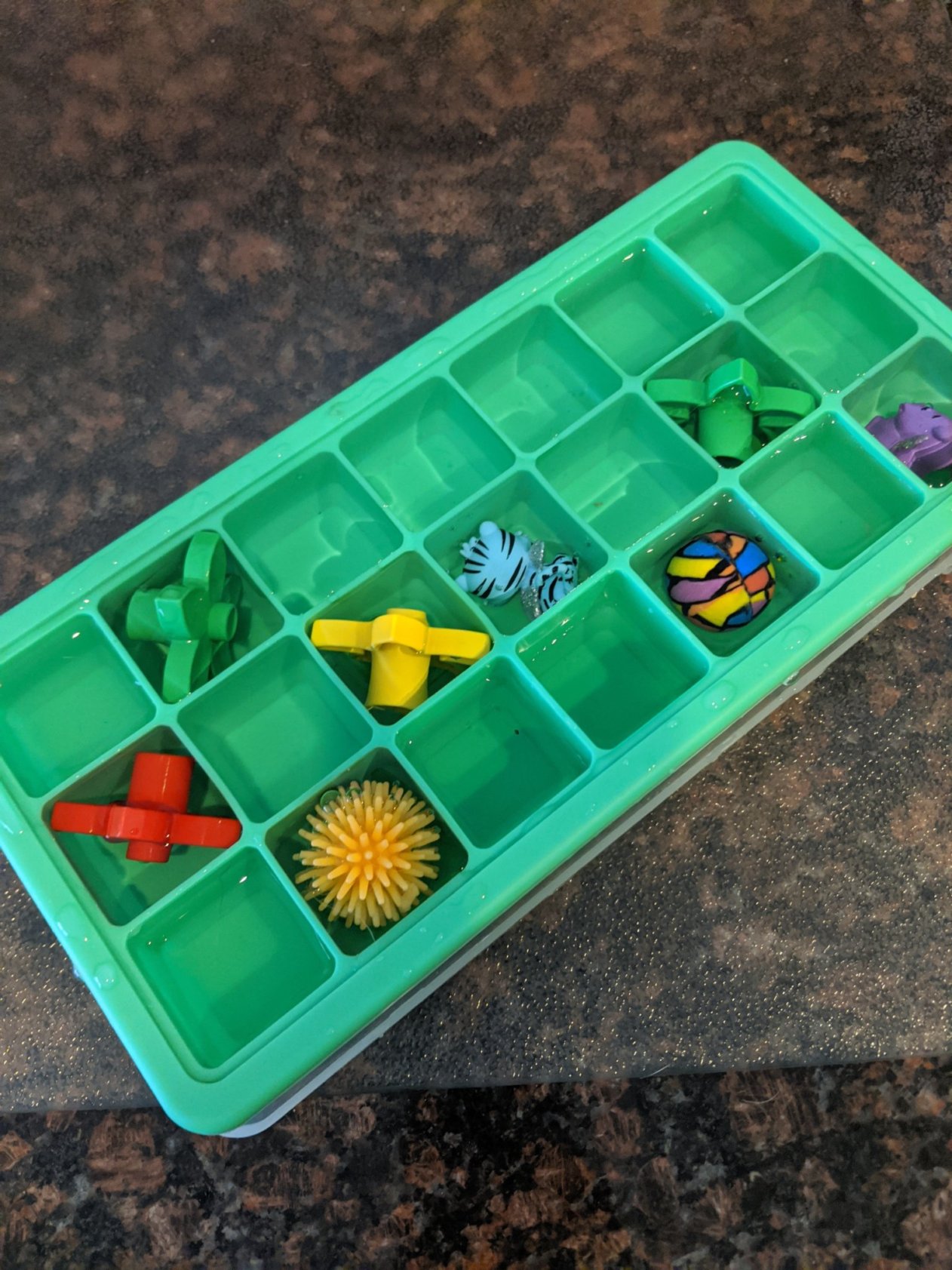 As it was 106 today in Austin, Texas, I pulled out the ice cube tray!

Not for my drinks mind you, but for my son to play with!

I got this idea from Thinkery, the children’s museum here in Austin, Texas. The Thinkery, as part of their toddler program Bloomers, froze small plastic animals in different shaped containers and then put the ice chunks in the toddler-size water table. Freezing stuff in tupperware and large shapes takes a long time so I decided to use an ice cube tray.

Our ice cube trays are silicone to make it easier for our son to help and learn in the kitchen. The soft form allows him to pop the cubes out himself instead of needing an adult to crack the tray. We did buy ice cube trays with this intent purpose: for herbs, beans, yogurt, and portion sizing so it wasn’t as green as possible in that I didn’t even try to ask if anyone had one used. I had a very specific type in mind. I’ve seen plastic trays at thrift stores, but less now that most fridges have ice makers. I’ve tried aluminum trays and they didn’t stand up well or last long.

If you don’t want many or you want to try the container method, try your snack containers. They will freeze more quickly than a meal container will. (Golf ball for size reference)

I found every tiny little toy we had that would reasonably fit in the ice cube tray. The Duplo Lego flowers are too tall for the ice tray lid, so I use the lid as a tray under the ice tray as I put it all in the freezer. There are also little animals he’s found at the park and those bouncy balls from the mall. All the toys interestingly were found or given to him so that’s greener in that we didn’t buy toys to make this experience. We are reusing the trays, rethinking.

The trays take at least 4 hours to freeze. We have two trays, one with toys and one with semi-precious rocks. The rocks are colorful and fun and he likes to collect them as they melt. Beans or seeds would work for one or two episodes and then you would probably need to compost those. Maybe pie weights, pebbles, traditional small Legos, marbles, etc. would fit well too.

We tend to put the ice cubes in our sandbox/pool but they would also work in a water table or the bathtub. It’s so hot out we spend a lot of time playing in the bathtub right now. Since he doesn’t eat these, we do use the pool or bath water to fill up the tray instead of using new sink water. It’s a small reuse of resources but it actually is a decent amount of water.

This is a great way to work on words for my toddler too. Cold, the colors, animal names, shapes, looking, matching and collecting are all skills he’s using as he plays with his ice cubes.